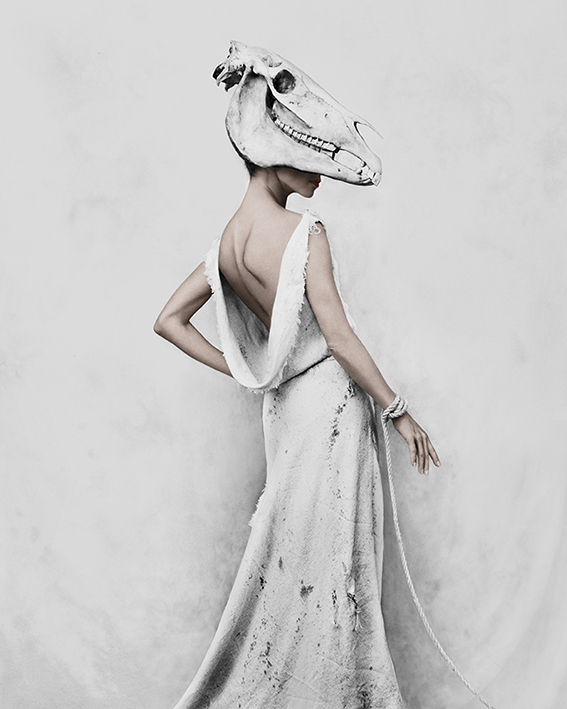 Fisterra is a fishing village on the far western coast of Spain. It is called “the end of the world,” because it is the most Westerly point of Europe, a yearning hand reaching into the Atlantic. Fisterra lies just beyond the end of the Camino de Santiago, a pilgrimage that scores the breast of Spain — over the Pyrenees, through Pamplona and Basque country, the high Rioja, the dry Algarve, to the Atlantic.

Most pilgrims reach Santiago de Compostela, the long walk’s official end. They attend mass, weep in the square, and go home. A few others continue to Fisterra. And so, it is a town for people who can’t stop, and for people who have nowhere else to go. Over Fisterra there is a lighthouse.

We arrived in late June, myself and Stefan, a man I had walked with and fallen in love with. It was cold, and the constant wind left our lips salty.

The only rooms were at a small, family run hotel. It was expensive, but we took it anyway. There was going to be a summer solstice festival beneath the lighthouse, and the town caught and held us like a tidal pool. I later learned that solstice derives from the Latin sol (for sun) and sistere (to stand still).

The beach in Fisterra is long, cupped between two stubborn hills jutting their chins into the ocean. Heavy waves break against stone monuments littered over the coastline like a giant’s knocked out teeth.

A man lived on the beach. A tall, slim man with a wild look, like someone who became a monk when it was already too late. He wore all white and had a soft tuft of hair at the base of his skull. He had been part of an encampment up the hillside. He had a beautiful voice and sang while he walked. His name was Felipe.

He took us up the hill to the remnants of the camp. The campers had been pilgrims, a few locals, some wanderers. Some had jobs on fishing boats. Felipe told us they’d been discovered by the police and forced out. He didn’t seem angry – no more so than you’d be to learn the moon has phases.

That night, he took us to a bonfire in a soft plowed field, with a barn full of people and live bands. We stood around the fire, faces red and oily from the heat – drinking beer, laughing, sharing cigarettes.

The festival began the next morning. The sky was coiled up dark and brooding like a romantic painting. We began up the long road to the lighthouse. People in rain slickers and flip flops made their way, chatting quietly. Over the road, a wooden bower had been built, a gate of sorts, hung with painted twigs, tangled strips of colored paper, and talismans that tugged at their moorings.

The road shifted to rocks and bald earth. The lighthouse was bigger than I’d expected and less charming, stuck to the escarpment like a barnacle. Its seriousness seemed cautionary, a reminder that these waters hold fears; its scanning light both warning and lament.

On the hillside, people danced and ululated and stood around. There were no rules to the worship – it was not grand or particularly moving. Felipe was there. “It’s beautiful, no?” he asked, his eyes shining. I envied him the beauty I could not see. People gave speeches and beat drums, and then, they walked the roads back home. The solstice was over. We stayed in Fisterra.

We started spending nights at a little bar. It was not chic, but a rotating cast of pilgrims curled in each night. Our group was often the only table, shouting and spilling cheap wine in an empty, fluorescent room.

When Stefan and I ran out of money for the hotel, we started squatting. There was a tower block on the shore that had paused construction. It had four floors suspended on rebar but no walls, like a concrete ribcage. We collected cardboard from dumpsters and made floor mats and a makeshift roof.

Mostly, it was quiet. Our life spun into simple patterns. We played make believe: we were stars in a reality T.V. show. We were undercover Danish sociologists. We were ourselves, but only sometimes.

A storm came through. The lighthouse scanned the black ocean and a sky like a whipping sheet. We dragged our cardboard mats to the back of the building, away from the churning shoreline, and I realized that I was afraid. Afraid of the storm, afraid to leave, afraid, still, of all the reasons I had come.

Days passed. We used the bathroom at the cafe next door. I was caught showering in the hotel we had checked out of. The matron found me in the corridor, hair wet, clutching a towel, and I ran all the way back to the squat. We stole. It was the kind of drunken recklessness that wants to meet a hard edge somewhere, to stop.

After last call at the bar, we’d walk to the docks. The restaurants there were quiet and left their patio furniture out overnight. They served breakfast to the fishermen as they came back in to port, but at night, it was us, the slap of waves on cement, the hum of vending machines. Leaning back in the white plastic chairs, we never ran out of things to talk about. We never ran out of silence, either. Just before dawn each morning, the fishing boats came in, their colored lights nodding eagerly toward home.

We lived in Fisterra as though it were a movie set and told the stories that made it possible to live. Others left. They knew it was cracked in a way my fingers couldn’t feel yet.

One morning, a man with a gold chain and purple polo shirt walked into the squat. He told us they were going to resume construction and that we had to leave. He spoke gently, gesturing with his car keys. They would begin construction the next day.

We packed quickly and threw away the cardboard, embarrassed to have been caught, embarrassed by the man’s kindness. We would move to the beach. Though I did not see it, each move took us closer to the ocean.

When we arrived on the beach, Felipe was sitting on the knee of a giant stone monument. His camp was at its base, a small tent, an old pot and plastic cups, linen spread to dry.  He waved to us, one of those big, slow waves that makes a person seem very far away. Stefan and I found a monument down the beach with a low platform, like a palm filled with sand. The stone was warm and blocked the wind.

That night, there was a bonfire. A bottle of liquor slowly made its way around the circle, and someone had a guitar. We took turns singing, and the fire lit the beach for what felt like miles.

We walked back to our camp, stumbling on liquor and deep sand, pushing and holding one another. In the palm of the monument, under the lighthouse’s liquid eye, we said the secular prayer that we said most nights: “Dear God, please let it not rain tonight.”

All night, offshore winds mounted the beach. It was dark when Stefan shook me awake. The tide was high, extremely high, and long, skimming waves rushed over the sand, licking the edge of our platform. We stuffed our bags and crossed the beach to find Felipe.

He stood on the shoreline, waves channeling around his ankles. He woke up floating, he said. His little tent lifted up from its pegs and skimmed over the beach. His hands found the zipper and he tumbled out, his tent skating past into the surf.

I could have died, he said. I’m so lucky.

The ocean took everything: his clothes, his tent, his pot and plastic cups. What can you do? He said. Really, I’m so lucky. I could have died. He began to cry. Each pass of the lighthouse lit his tears suddenly, like twin lightning bolts. What can I do? He asked, mouth wide, tears running over his teeth.

Jess Bernhart is a writer, poet, and performance installation artist from Atlanta. Jess has created poetry installations for ArtFields 2017, Sibyl, Performance KUNST, ART Decatur Book Festival, and The Imaginary Million. She is a contributor to Creative Loafing, and has published poems in Loose Change, Eyedrum Periodically, fLoromancy, and others.