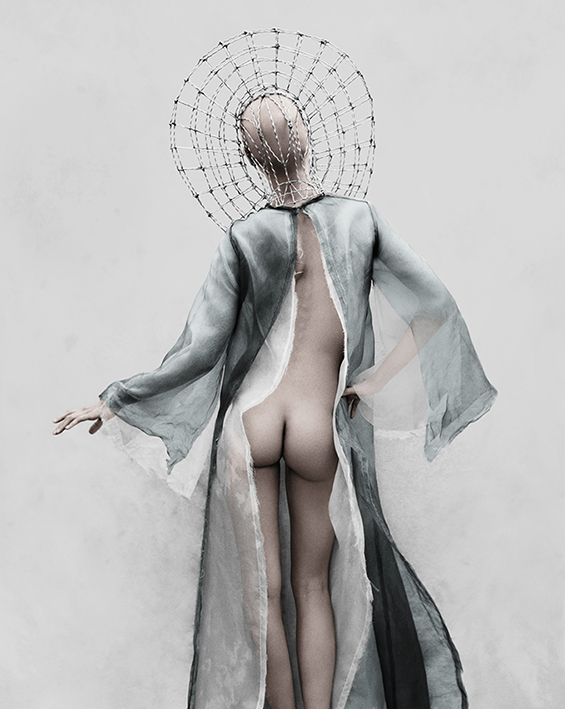 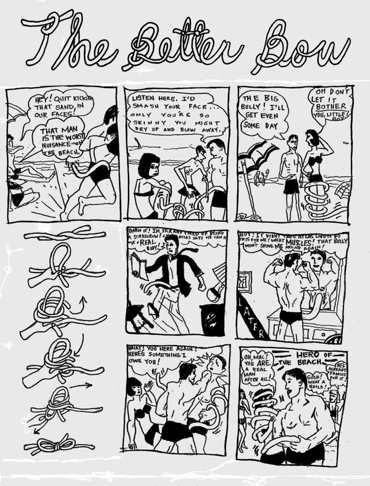 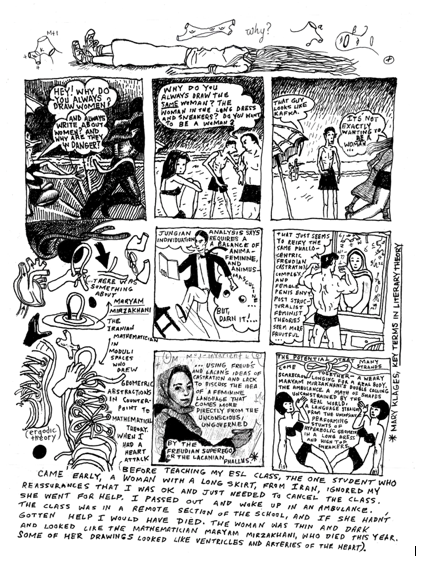 1. The Better Bow
At first the “Better Bow” was indeed better; it stayed tied and tight the entire day and at the end of each you could untie the knot with a single satisfying jerk of the lace and have it fall loose without the bother of the knot-upon-another-knot improvisations that had been making a mess ofputting on your boots in the mornings, and taking them off at night.

But the Better Bow was presenting its own unique problem. It occurred in the last stage, where the end of the lace is passed through the opening of the twice-wrapped loop before the final tug. You’d hoped that the problem would go away with more practice. It did not. The issue was this: the two wrapping moves had to be tight enough to hold, but open enough to admit the other end for the closing tug. This required a delicate coordination of finger-tip moves: holding together the double wrap while worming the last bow intact through the hole to secure the “pull-through” loop. But the laces you wore were black, so it was hard to see clearly into the dark hole and distinguish which part of the lace was the loop intended for pull-through, and which was the double wrapping lace itself.

2. The Problem of Physical Memory
In one sense the problem with the Better Bow was an old issue in a new form: what you called “the problem of physical memory.” You were like the skinny guy always getting beat up by the bully on the beach, (had actually been such a skinny guy on such a beach), unable to learn the easy methods in Charles Atlas’ book that could help you build a powerful physique through weight training and reps. Yet for you the problem was more radical; you did not maintain exercise regimens for long, not because you lacked discipline but because your body did not “learn,” did not “remember” from such repeated exercises; in a way it could be said that your muscles suffered recurring spells of amnesia. Not only that, but even the experience of being beat up seemed to require a certain physical memory that you could not hold for long: the sputtering and wincing and blinking and wiping away of the sand in your face, the choked throat gasping to hold back tears (no! not in front of this woman! anything but that!!!) the actual, powerful push of the bully’s hands, the propulsion off your feet, the sail over the little dunes and castles, the impact of your ass on sand, the crabbing back and staggering to your feet and falling back and feeling your face burn beet red in helpless humiliation and the involuntary buh buh buh buh buh of the trembling lower lip, the shaking hands and legs, the possibility that you might urinate in your trunks (no! not in front of this woman!) Sometimes, to continue the metaphor, you could not remember being beaten up. Could not remember to be beaten up. Sometimes, to continue the metaphor, you weren’t even at the beach. Or the bully was a nice guy that day. Or you were the bully. You had even forgotten how to be victimized, how to be the one who could never give the right answer, whose fists dissolved into mush bludgeons of Stockholm Syndrome before even being raised. The opening made by the double turn of the lace swallowed it all, triumph and defeat, sweet mastery or hapless collaboration. Was the opening in the loop part of something larger, or was the opening what consumed and encircled all else? The whole hole, or the hole whole?

3. Little Boy
It seemed to turn on, to be hinged on, to pivot around something else. Something more than shoe laces, and the problem with them coming untied all the time, and tying them, (or typing them?) in a different way. It was also the particular bow being in a hole, someplace dark, after being beat up by a cartoon on a cartoon beach:
Hey, quit kicking sand in our faces!
That man is the worst nuisance on the beach!
Listen here!
I’d smash your face, only you’re so skinny you might dry up and blow away!
The big bully! I’ll get even with him someday!
Oh, don’t let it bother you, little boy!
Darn it! I’m sick and tired of being a scarecrow! Charles Atlas says he can give me a real body!
All right, I’ll gamble a stamp and get his free book!
Boy! It didn’t take Atlas long to do this for me! What muscles! That bully won’t shove me around again!
Here’s something I owe you!
Oh Mac, you really are a real man.
Hero of the beach.
He’s already famous for it.
The bully on the beach. The sand, the others watching. The withering words of his woman: Oh, don’t let it bother you, little boy.
There were legions of readers, there were armies of boys, there were countless humiliations, there were dreams of the new way, the new thing, the book. The Better Bow.
If there were just a different way
If there were just a better way
An extra turn of the knot, two turns instead of one, just a simple doubling of the turns, just a second turn, just a simple work out, just a few minutes every day, just one little change can bring about enormous changes oh Mac oh Mac

4. Senior Scarecrow Fiasco
There was a dream, there was a flight over the dunes and castles, you were flying over the sand and the bathers, over the bully, he’d pushed way harder than he knew, that you had indeed dried up, and blown away, there was really nothing inside the scarecrow body that you occupied, that there had been, a long time in your past, an art teacher job at a camp for senior citizens, and an ardor to delight and horrify the campers with German expressionist scarecrow-making classes (turning the vegetable and flower gardens into sets from Cabinet of Doctor Caligari), or Art Therapy painting and dance sessions that descend—or ascend—into ecstatic, Woodstock-style communions with inner angels or demons, naked under the full moon, or setting sun. There is a love-affair in there, as passionate as any younger coupling could be, and terror and cowardice and redemption getting a nature walk completely lost and panicked in a muddy swamp, with frail hearts and diabetic shock waiting to claim your charge of seniors, hopeless in the dark until your better bow prevails and you sing your way back to the trail, Cat Stevens and Neil Young over the rhythmic slaps at mosquitoes, and suction of boots marching through slough to bog to dry land, again.
Well I dreamed
I saw the knights in armor coming
Saying something about a queen
There were peasants singing
And drummers drumming

And an archer split a tree

And regretfully no facilities for archery, but spirited workshops on making and using slingshots and catapults, stun spears from car batteries, home-made explosives using Visco fuse, charcoal black powder, Coffee Mate and toilet paper. You will teach your campers (and yourself) the arts of camouflage and bird calling, insect cuisine and snake bite suck, how to survive falls from trees, or bathtubs, how to play chess blind-folded, get high on empty whipped cream
dispensers, and/or see through skirts or pants. How to dress like a man if you’re a woman, or like a woman if you’re a man. How to change over. How to be both or neither. And at the end you hate them all, see only your own failure to make it as an artist, back in the city, where you belong and can’t wait to return to.
And it is strange to think now that they are all dead, and the camp is closed, and you are the same aching, hopeful and even ageless age as your campers were then. And that now you still make art, perhaps with more kindness for your limitations and deficiencies, but still burning, still hungry, still rushing to get back to painting or writing as you end each class of students, (now
they are refugees learning English as a Second Language, from Bhutan, Afghanistan, Iraq, Iran, Syria, Sudan) with new iterations of the old song:
Goodbye my friends
Goodbye my friends
Namaste! Namaste!
Till we meet again, Till we meet again,
Bedrood!

(And what did the scarecrow lack? The heart, the brains, courage?)
You walk again through the brilliant buzzing garden paths, serpentine around bowing sunflowers, and cabbage cairns, under grapevine trellises and through tomato stake totems, managing the scare project with an irrational mastery, a better bow to life: to build a whole army of scarecrows out of boards and nails and chicken wire and old clothes and straw and tempera faces and tin foil fringes and hats and pie plate noise makers and cellophane to reflect the sun, and make lots of noise and rise up out of the corn and do the thing that scarecrows do, and that the birds came down to watch the seniors hammering and painting, laughing and cutting up old shirts and pants and stuffing everything with straw and making faces out of old tin cans and nails and broken bits of glass and the birds, mostly black birds but also barn swallows and robins and blue jays and even blood bright cardinals sat on the fence post that ran alongside the arts and crafts room and watched the senior’s under your direction build the scarecrows and you can probably guess what happened can see what’s coming which is that when they finally put the scarecrows in the garden they not only didn’t scare off the crows and the swallows and the jays and the robins but actually attracted the birds, to the point where they were practically covered the scarecrow bodies and all over the corn and the potatoes and tomatoes, just like the Alfred Hitchcock movie The Birds and the director of the camp had to tell you and your art class of senior citizens that they would have to remove all the scarecrows that they had worked so hard on, take them all out of the ground in the garden and get rid of them, put them in the woods or something and that is what they ended up doing, though not without a lot of difficulty, because the birds by this time had grown very territorial and aggressive about the garden and their scarecrows and actually bit and pecked and squawked and buzzed any of the seniors or anyone else who tried to remove the scarecrows. The only way to move them was at night, and when they were taken to the woods and leaned up against trees they spooked the motorists driving by at night, who could make out, in-between the trees, the ghostly figures of the scarecrows, some with pale white faces and broken glass for eyes. scare crows were supposed to do but a strange thing happened. The locals started a rumor that the camp was conducting satanic arts and crafts, that the scarecrows were black magic juju in the woods, and when one of the seniors was insulted in a town restaurant and you yelled back and refused to pay the bill, one of the waiters, the manager’s son, twisted your arm behind your back and threw you out the door.
He’s already famous for it! You remembered the scarecrows and Charles Atlas whenever you fumbled the tying of the Better Bow knot, or fumbled anything else. Binaries slipping into the pansexual. Things coming undone. It didn’t really help anything, but it made a kind of sense, kind of tied everything up. And stayed tied, when everything else unraveled. 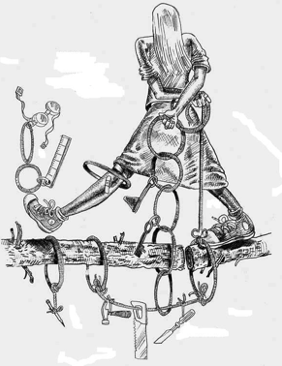 performing stunts of hyperbolic geometry in a long skirt and sneakers 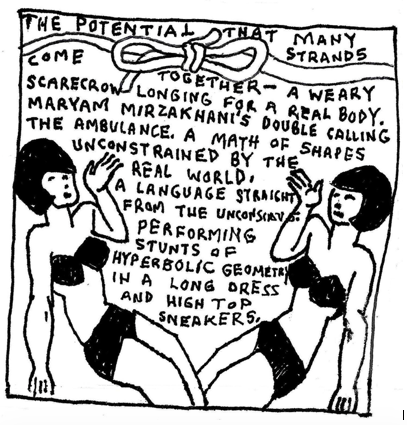