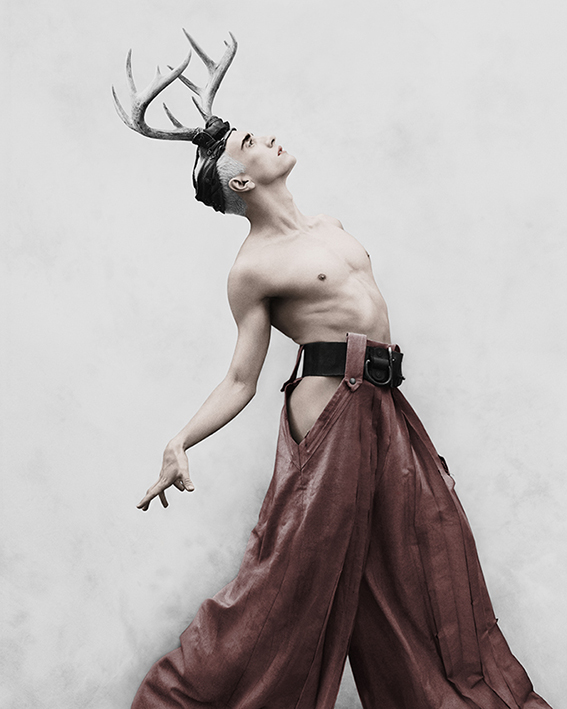 Charles Starkweather terrorized the Great Plains in the winter of 1957–58 when he embarked on a brutal murder rampage with his fourteen-year-old girlfriend, Caril Ann Fugate.
—Encyclopedia of the Great Plains

I pocket a gold kazoo, a perfectly good comb
before the day’s gone dog-tired of lugging
bin after aluminum bin from prairie streets.

Sundown, riding the dump truck’s backend,
I watch you twirl your baton in the yard
of a home that will soon house your dead.

I come ‘round after my route, blue jeans,
black boots, asking your name, favorite
subject in school, if you want the kazoo.

You blush beyond a row of shrub roses,
smoothing the sides of your blouse
as a Badlands sunset bleeds out.

Even a girl in color guard knows love
when she sees it. I run the comb through
my hair, pull a smoke from my sleeve.

You just don’t see the road like I do:
way out past the corn and cattle fields,
Rockies upon a thunderstruck horizon.

Folks don’t think much of a guy who throws
garbage for a living, you say between bars
of a buzzing “This Land Is Your Land.”

Well, Caril Ann, what would life be
without men like me? A Studebaker
lurches into your drive. Gold flashes

in your palm as you turn to the house.
Your Pa stares through the windshield,
buried in blue. The baton lies in the grass.

The Amateur Cook and His Lover

Eat and love, to be sure, but you better eat first.
—Jim Harrison

She cried over her bowl of Carbonara:
no one had ever cooked like that for her.
The egg-laced spaghetti steamed, a soul
singer moaned about the aroma of a woman
no longer his woman, the pendulum
of her hips as she walked out the door.
Candlelight murmured like a nervous heart
as they raised spools of pasta to their lips,
the night melting like braised onions. More
Motown women and men crooned warnings
from their smoldering lungs, the songs of loss
a soundtrack for full-bellied sex, how we allow
our bodies to be consumed, lips to fuming ribs,
groins collapsing like black holes in the brain.
But all this is memory, the woman having gone
gluten-free years ago, the man now eating alone.

Unabashed Sapphics on Hot and Heavy

Exalt the exhale, the doomed plosive of breath.
Tender, fleeting poets, permit us love one
last time. Though guts harangue us for food, wafer
of flesh, though throats unslaked

groan for water, wine, let the exit of breath
sustain us, let us run on fumes. The purpling
dark of dawn runs on and on, a spool of red
surrounded by the white

light of gristle, the marble that corrugates
our veins. Listen for the glassy, throbbing hush
that annihilates the need for speech, that dumb
tussle of the tongue

for, for what? Exalt the exhale, screw the need
to take in and in; the eucharist isn’t
all it’s cracked up to be. Here I take what you
give up, the real sweet meat

of breath expended, nothing left but a lack,
Babel burning, planks singing into our palms,
some extra syllable we never needed
blessing our starved bodies.

Greg Emilio is a Southern California native whose poetry and essays have appeared in Midwestern Gothic, Miramar, Permafrost, Pleiades, San Pedro River Review, Spillway, and World Literature Today. He’s been a Pushcart and Best New Poets nominee, was first runner up in Spoon River Poetry Review’s 2017 Editor’s Prize, and won the 2015 Pangaea Prize from The Poet’s Billow. A devout bon vivant, he bartends while pursuing his PhD in English at Georgia State University in Atlanta.