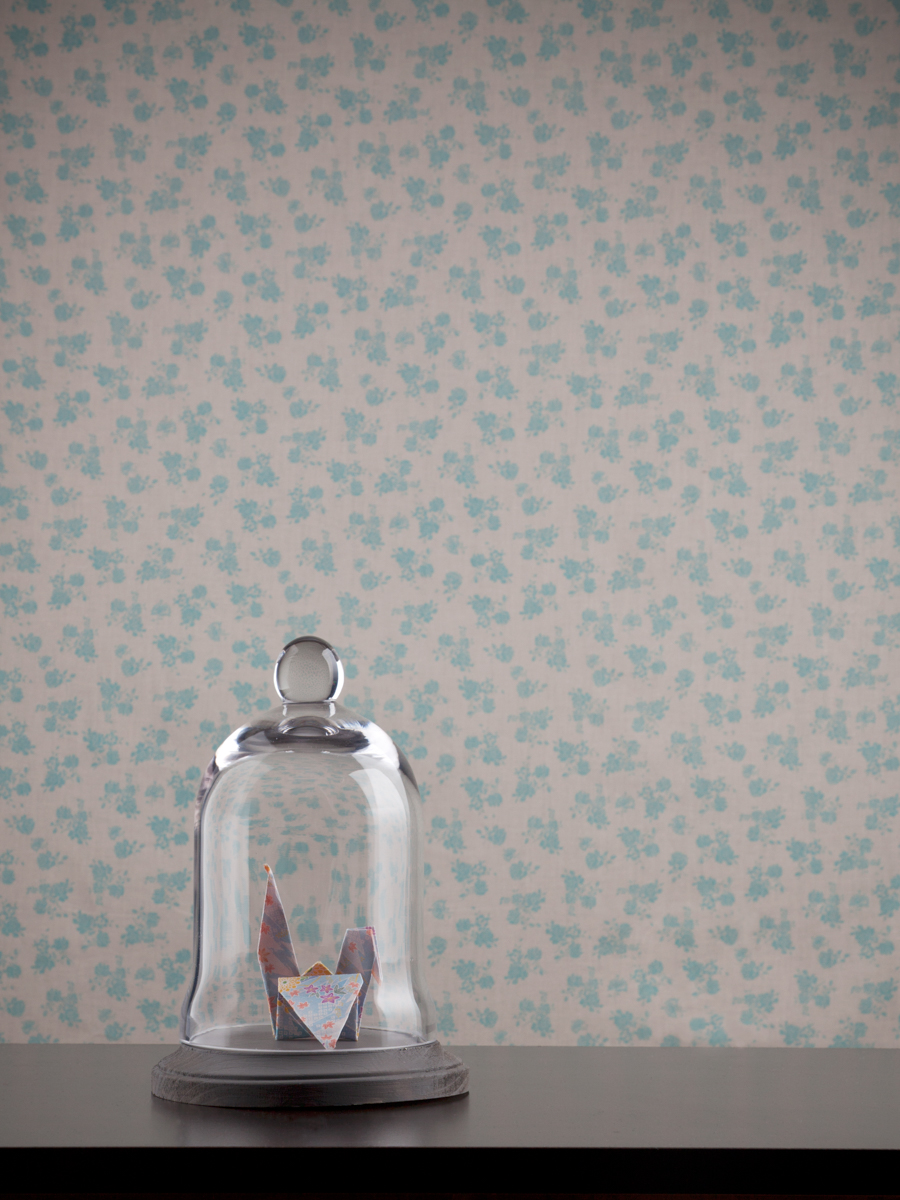 His name is Roger Paradise. He is an artist. This is Roger’s studio. This is where he works. His work is his hobby. His hobby controls him. He is his hobby’s hobby, like a gentleman’s gentleman only without the pay. At times he tells his therapist: I believe I’m being haunted. The therapist laughs. Haunted. Like a French chateau? No, Roger says. Nothing like that.

Lately, his dreams have found a way into his daily routine. For weeks, he’s been unable to distinguish between reality and make-believe. This perpetual state of reverie brings him closer to Don Quijote, but destroys his social life.

The space of the studio is an obstacle course. The fifty foot ceilings, the white walls and the carefully delineated light patterns are nothing but traps. Shapes are not to be trusted. Planes collapse, perspective folds in on itself, lines curve with unexpected determination. There is little difference between the space of the exhibit and the space of the mind. Brought to life, if only for a second, silhouettes make an attempt at narrative, then fade in the background.

The women are always there. They have been, from the very beginning. Mother and daughter, lover and listener, stranger and saint. Their roles are arbitrary. What truly matters is the change. They come and go as they please, they show up unannounced, they overstay their welcome. There’s hesitation in their movements, but no restraint. The space of the studio agrees with them. Their skin becomes more radiant, their lips part, the blood vessels on the side of their necks pulsate.

Although they know he has no interest in the female form, they persevere. At times the daughter comes alone. She tempts him. She strikes lascivious poses or fakes interest in an unfinished piece. He tells her to undress so he can pour hot wax on her arms and extend them beyond recognition. He tells her to kneel and touch the floor with her forehead. He tells her to pray. She doesn’t cry, doesn’t go away. She suffers. Her arms show the signs of abuse, beautiful in their tortured form, red and purple under the burnt skin. He likes peeling long layers of skin, he likes exposing what was once hidden. The daughter reveals the secrets of her body one by one. One day there will be nothing left to tell. That morning she will find the studio doors locked and the windows nailed shut. It is a risk she is willing to take. She is the anti-Sheherezade. She struggles to prolong her death.

There’s nothing tragic in her progressive disappearance. She’s starved herself for so long, trying to fit inside the fractured silhouettes piled on top of each other in the moldy corners of the studio; plunging deep inside the well filled with liquid glass; squeezing her thin waist inside the smallest corset – her body split in two halves held together by sheer stubbornness – that the thought of her gradual retreat into non space is less than shocking. The glass cast mimics the shape of her skeletal body and often, during the lunch break, she plays with it in the sandbox he keeps for her in the middle of the room. It is a transparent rectangular box filled with sand, inside which she buries a glass femur or a fragile glass hand or – in moments of colossal frenzy – even a glass skull. Small pieces of flesh fall off of her arms and land sizzling on the ground, but other than that there are no serious consequences to the glass game. At the end of the day, diminished and bleeding, she picks up her things and leaves through the back door.

Everything is possible in the space of the studio. There is a new word for every act of violence. Sensuality is in the air, in the swift waves of the Vaseline jar, in the treacherous softness of the wax, in the compliance of the fabric. He’s always been surrounded by fabric: his mother was a seamstress who understood waste. All these years, he’s waited patiently for the opportunity to examine the slow process through which yards of flat fabric develop into form through the use of pattern. A torso sprouting forty yards of cloth is beautiful to him. The hybrid is beautiful. He wants to cross bodies with objects, divide textures, push the limits of the fleshy outline, ask biology to cooperate.

When the mother walks into his studio, he knows she is the one he’s always wanted.
Your name is Roger Paradise, she says. The artist.
They understand each other. From that day on, their movements become repetitive and brutal. In time, she develops a quiet efficiency which allows them to cut corners. One day, she waits for him bleeding from both wrists, open, ready for the strange ritual which resembles the tedious rehearsal of a play never to be performed.

(That summer he rents a small theatre, learns ballroom dancing and lives, frenetically, every fantasy the dark space of the stage allows him to mount. She submits to everything with a passion whose intensity saddens him. Intense personalities have a short life, he says).

The first time he sews silk directly to her skin her body turns to glass.
Now, you are more beautiful; I can see right through you, he laughs with delight.
Tell me everything you see on the other side, she says.
I see the wind over rooftops chasing butterflies. I see a reward. Tell me you love me.

On the eve of their last session she writes him a letter.

Theories of flight begin with the impossibility of flight. Take a boy, for instance. Any boy. At 20, he still believes in close encounters of the third kind, survival of the fittest, and affairs of the heart, the ones he’s read about, in which the lovers die together, holding hands. That’s what the movies tell him anyway. Where does he go when he leaves the cinema? What does he want? He has amazing regenerative powers so we can hit him again and again, until his insides bleed, until his arms, red under the burnt skin are numb with pain. It’s ok. He is a boy. Eventually he’ll learn. His body is of little consequence to him. He shouts this from his balcony on sultry afternoons when the sun makes people drowsy. He spoils their siesta. He eats, he lusts, he sleeps. Sleep is his religion. Every day, despite conscious efforts to the contrary, he learns a new gesture of affection. Every day he casts a casual glance in the mirror, sensitive to the minutest change. Time passes. On the eve of his 21st birthday he writes: “I, Roger Paradise, solemnly swear that if 20 years from now I haven’t changed the world or found the love of my life, I will kill myself.” Twenty years later, on his birthday, he finds the note tucked away in an old issue of Time magazine. He reads. He tears the note into little pieces. All this childishness. This arrogance. He closes his eyes and cries. Vulnerability suits him. He looks good vulnerable. With his eyes closed he reminds me of the 20 year old boy. I never loved him. I never loved the boy. I loved the possibility of him.

When Roger gets the letter he knows he will never see her again. He leaves the studio in a hurry and runs to the end of the town. Once in the small gallery where he saw her for the first time, he searches inside every painting. She is made of glass, easy to lose across landscape or water. He holds his breath and listens. Her heartbeat is weak but regular, and he traces it to the attic where she reclines, exhausted.
Tell me you love me, Roger cries and she caresses his face.
I can’t.
Then come with me one last time, he begs.

He warms her body which turns back to flesh and now that she can feel again, he takes her to his studio. He uses her body sparingly. He tests its possibilities, he asks it to expand, he makes it devour other bodies. Used as a tailor’s dummy, the mother’s body proves extremely helpful. He saws off her arms and splits her chest open with a pair of silver shears. Then, with the help of an assortment of shiny fastens, hooks and eyelets, he reattaches the pieces one by one. He works in sections: he laces up the right
and left side of the back, he sews the arms together. And although he never assembles her body the same way, the reattachment itself feels like a cure.

Her insides need mending as well. The mother is a juggernaut. She levels everything in her path in a desperate attempt at democracy. He laughs and she ignores him, pretending that the humiliations to which he subjects her daily do not bother her. This is the abject body, he tells her, and smiles, and quotes his sources. He cuts her open, watches her wipe the blood off her thighs, finds inside her other beings. At times, it is the girl, at times, a tumor. Same thing, she says, you’ve got to take out both; there is no difference.

He uses the mother’s body to write his favorite quotes: “Death is a simple phenomenon in nature only people make it complicated;” or “Let us put some order in our pleasures,” or “I leave this manuscript, I do not know for whom. I no longer know what it is about.”

His name is Roger Paradise. He is an artist. Every evening, in the somber atmosphere of his studio, he goes through the same strange ritual prompted by the fractures in his soul. We are rehearsing a play, he tells those who ask. We are always rehearsing. The cast changes, perspective folds in on itself, lines curve with unexpected determination. Can I tell you a secret? I never know where I am.

The women are always there. Mother and daughter, traitor and hero, stranger and saint. They come and go as they please, they show up unannounced, they overstay their welcome. At times they pretend not to know each other. They have tea in the sandbox.
They make small talk.

Lately the sand has been gathering some energy. The storm fills the cups with sand and the women die. Again. At times they spend countless hours holding each other. Their wounds keep each other company. It is a touching picture, if you’re into that sort of thing. The mother’s hair drowns her features. The daughter’s body is now barely visible. Today she’s shed the last layer of skin. It won’t be long now.

The space of the studio is closing in on them. Reality is changing sides and he’s running out of time. What he’s after is an insufficiency of form. What he gets is the complacency of content. Not good enough, ladies, he laughs. Not good enough.

Dayana Stetco’s trilogy of plays, The Falling, was released by Yellow Flag Press in 2016. Her short story chapbook, The Secret Enemy, was released by Fermata Publishing in 2015. Her book, Seducing Velasquez and Other Plays, was published by Ahadada Books in 2009. Her plays have been produced in the U.S., in her native country, Romania, and the UK. Her fiction, plays, essays, and translations have appeared in Requited, Two Lines, Packingtown Review, BathHouse Hypermedia Journal, Spelk, Emergency Almanac, Metrotimes, Eleven Eleven, Masque & Spectacle, and others. She is the Artistic Director of The Milena Theatre Group, and a professor of English at the University of Louisiana at Lafayette.